Not. At. All. He is one heck of a funny guy. Just watch him! 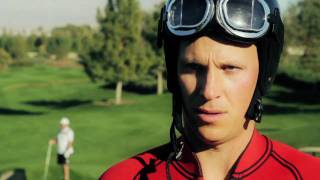 Ben Crane is probably one of the funniest PGA Tour players out there. He helped create the Golf Boys (their songs are embarrassingly addicting), he has golf exercise regimens that he takes VERY seriously that he has shared with golfers and fans on YouTube and he also pokes fun of how slow he plays golf.

He’s got one heck of a sense of humor and after taking a selfie with THE Bill Murray (who is an avid Pro-Am participant on the PGATour) social media went wild. Put these guys in a room together and it must be one awkward yet hilarious meeting.

Got a picture with Carl Spackler today. So I got that going for me, which is nice. https://t.co/W2SDZolZRp—
Ben Crane (@bencranegolf) May 25, 2016

Bill Murray is an avid golfer who had just finished playing the Pro-Am with Jordan Speith. But, I wouldn’t be surprised if Mr. Murray would suggest his next partner be Crane.

It’s a great time for all at the PGA Tour.