EDISON, N.J. – Far, far away at Plainfield Country Club, 250 yards out in the center of the driving range, there are 7 kids running around the field. It’s the second round of The Barclays tournament and the morning groups are out playing their rounds while the afternoon groups are slowly trickling into the locker rooms to get dressed and to warm up at the range. These kids aren’t playing around or causing trouble, they are shagging golf balls for some of the greats.

Rickie Fowler strolls in at 9:45am in preparation for his 12:44pm tee off time. A quick hello to some of the guys at the putting green, a smile and off he goes to the locker room.

Kuchar is seen focusing on his putting for a good 45 minutes along with a few other tour players getting ready to tee it up. All the while, the kids are running around the field picking up the already hit golf balls on the field, running back to a tent and putting them in bags on tables for players caddies to grab for their golfers. Any brand of golf balls you can think of are on that table and the kids are loving every second of sorting them for their heroes.

The kids don’t know their handicaps (yet) but one of the kids qualified for the Drive Chip & Putt competition. Their favorite players? “Rickie Fowler!” everyone said simultaneously.  “And Jason Day!” one of the boys shouted. When asked about Jordan Spieth they all said they didn’t like him anymore “because he talked trash about the course.” Yesterday after the first round Spieth said: “I’m not a big fan of the course. It doesn’t fit me very well particularly. But I’ve also won on courses that I didn’t think fit me very well.” Let’s see how Jordan plays today and maybe he will be back on their list. 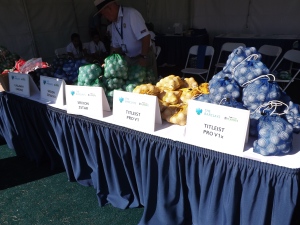 1X” again simultaneously without even a second to come up with an answer.

Who hits the furthest? “Gary Woodland and Adam Scott. Yesterday we wore Gary Woodland shirts around the course. It was kind of a junior fan club. It was a lot of fun,” one of the kids explains.

The PGA Tour brings out people of all ages, but it’s most inspiring and hopeful groups are the young kids who are out rooting for their favorite players, hoping to one day be the next Rickie Fowler or Jason Day. There is no doubt that those 7 kids will talk about their week of picking up golf balls for some of the greats and watching them practice only a few feet away from them for the rest of their lives. These kids might not know their handicaps today, but I wouldn’t be surprised if they end up playing on their future high school golf teams.