Just inches away from making it to the playoffs, Jordan Spieth, poised as usual, walked off the 18th hole clapping his hands and tipping his hat. He’s still looking forward to the PGA Championship and says he is still as confident as he was when he stepped onto St. Andrews in the hopes of completing the third leg of the grand slam.

Spieth played solid golf, as usual, but just missed his chance to win. Moving to the 4-hole aggregate playoff we have Leishman, Oos and Zach Johnson.

Johnson had over an hour between the 18th hole and the playoff holes, while Leishman and Oos only had a few minutes in between.

The second hole,  Johnson with a confident stroke, birdies the hole, while Oos and Leishman both leave with pars.

Off to 17 (the 3rd playoff hole) each player hits a solid shot off the tee all landing in the fairway. If any of these guys are nervous, they are quite great at hiding it. 2 on, 1 off. Johnson hit his approach shot to the left of the green. Oos has an opportunity to win this hole. All three players walk away with 5s.

Johnson has an amazing spin on his second shot pushing the ball closer to the hole, Leishman chips on and the ball rolled away from the hole. Oos, chips on with the chance to birdie the hole. Leishman finishes the hole first with a par. Johnson misses his birdie putt for the win…seconds after, Oos missed his putt and Zach Johnson wins!!! 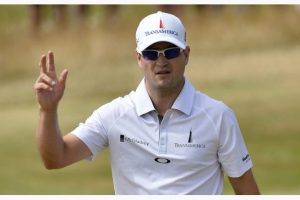