In a hotel lounge in Halifax, Nova Scotia, my family camped out on Masters Sunday to watch the remaining 7 holes that we were able to catch after landing.

It was our first day of vacation and all we wanted to do was watch, as Jordan Spieth dominated the field. And boy, was it totally worth not exploring the area until after the Masters! Spieth, although only 21, is composed, poised and respectful and it was a blast watching Bubba put the green jacket on him at the end of the tournament. 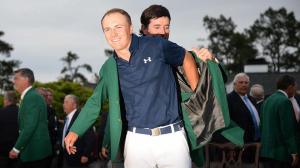 There’s a new generation coming up and Spieth is in the lead setting a great example to younger children and teenagers who love the sport.